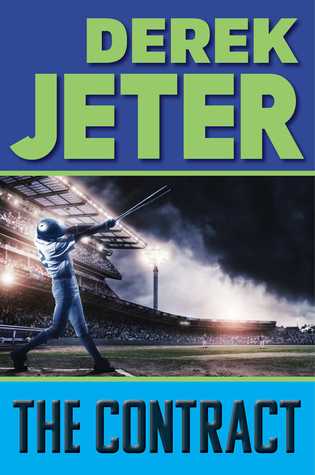 About the Book:
The debut book in the Jeter Publishing imprint, The Contract is a middle grade baseball novel inspired by the youth of legendary sports icon and role model Derek Jeter.

Derek Jeter is a legend in professional sports and a role model for many youth around the country. While leading the New York Yankees to five World Series Championships and achieving a myriad of milestones and accomplishments on and off the field, including thirteen All-Star nods and membership in baseball’s exclusive 3,000-hit club, Jeter has established a reputation of unparalleled character, credibility, dedication, and excellence. When Jeter was a boy, he had the dream of becoming the shortstop for the New York Yankees. Inspired by his childhood, this start to a middle grade series is about a boy who sets high goals for himself and makes his dreams come true through hard work, teamwork, and determination.

My Review:
If Derek Jeter says it, it must be true. I’m sure all young boys optimize him to the highest regard especially those that are into baseball after all Derek Jeter is legendary at best. He is now an author and in The Contract you will find his first pen to paper creation. In The Contract a young boys dream is realized and he sees that it ill take more than sitting on the sidelines to achieve his goal.

I like that the story shows how his parents were involved from the start and forced their son to look at this goal as a lifelong dream combined and that he could achieve it if only he did NOT give up! This book is perfect for the 8-12 year range and any young child reaching high for the stars. This book will encourage them and inspire them to keep reaching even when the odds are stacked against them.

**Disclosure** This book was sent to me free of charge for my honest review from the publisher.