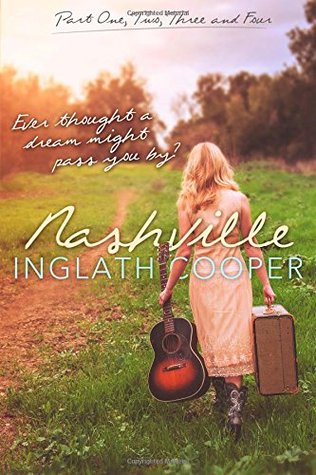 About the Book:
Part One – Ready to Reach
Ever thought a dream might pass you by?

Nineteen-year old CeCe Mackenzie is determined to make her dreams come true. She heads for Nashville with not much more to her name than a guitar, a Walker Hound named Hank Junior and an old car she’d inherited from her grandma called Gertrude. But when Gertrude ends up on the side of I-40 in flames, Nashville has never seemed farther away. Help arrives in the form of two Georgia football players headed for the Nashville dream as well. When Holden Ashford and Thomas Franklin stop to offer CeCe and Hank Junior a ride, fate may just give a nod to serendipity and meant to be. Because while CeCe is chasing after her dream, she might find love as well.

Part Two – Hammer and a Song
CeCe McKenzie grew up dreaming of a life doing what she loves – singing in Nashville. When she and her Hound dog Hank Junior set out to make her dream come true, life takes some twists she hadn’t counted on. Like falling for Holden Ashford, a songwriter with a gift. And also a girlfriend. Can a country music star’s hunky son help her forget about Holden? Or is that even possible when her heart insists on writing the song?

Part Three – What We Feel
Hunky musicians Holden Ashford and Thomas Franklin rescue Nashville bound CeCe MacKenzie and her Walker Hound Hank Junior from the side of the road when her car catches on fire. A less determined girl might have let her dreams go up in smoke as well, but not CeCe. She’s been singing all her life, and she just wants a chance to do the thing she loves in a place where music is part of the fabric of life. As it turns out, Holden and Thomas want the same thing, and it isn’t long before they’re all chasing after the dream together.

Falling in love hasn’t figured in to CeCe’s plans, but the moment she sets eyes on Holden, her heart is asking why not? Holden is drawn to her as well, but he already has someone in his life, Sarah who still lives in Atlanta, Sarah who loves him. Who he thought he loved back until CeCe makes him realize he hadn’t really known that love could turn him inside out.

But an unexpected visit from Sarah brings to light a terrible truth and Holden is faced with a choice between doing the right thing or permanently defining himself as a guy he never thought he would be.

It is only in letting each other go that both Holden and CeCe will come to understand that in life and love, the part that’s real is what we feel.

With each of them gravely injured, one will not survive, forever changing the lives of everyone involved. Will one man’s hatred and contempt demolish all of their dreams, or will they eventually reach a place where they can even take pleasure in the rain?

RITA AWARD WINNING AUTHOR INGLATH COOPER writes books that aim to give her readers a mini-vacation. A stretch of time during which they can visit other places and other people’s lives. Her books have reached the top 100 Amazon Kindle Bestseller list, with Truths and Roses hitting #11. Inglath Cooper’s Nashville series became a reality after she spent time in Music City, writing lyrics with other songwriters. She fell in love with the community and gets to revisit regularly through her characters.

My Review:
Ready to Reach:
CeCe MacKenzie’s one and only dream is to make it big in country music. But with all her problems she is not sure she will ever see that dream realized. Soon her luck is about to change though when Franklin and Holden Ashford are able to give her a ride to Nashville because they are headed that way, as well. Before she knows it she and these two guys could of been pinned as family with all the singing and carrying taking place.

Hammer and a Song:
After CeCe’s dog Hank Jr. is put into a pound, she and Holden wait up all night for someone to let them in. Arriving back at the apartment with Hank Jr. and a sweet companion by the name of Patsy, Holden and CeCe arrive to a visitor. With all the extra people hanging around CeCe doesn’t feel too much like singing especially if that means she has to sing with Sarah.

What We Feel:
Holden has been gone exactly 19 months helping Sarah with her cancer treatments. CeCe is going strong with Beck, all the while singing gigs with Thomas. When they are offered both a tour and a recording, Holden arrives back in Nashville within days. But he doesn’t arrive empty handed, he brings his problems back with him. When he arrives and sees CeCe with Brock he gets very upset so much so that it threatens the integrity of the tour. Just when you think everything is going to pan out, tragedy strikes.

Pleasure in the Rain:
After the shooting, everyone is in the hospital fighting for their lives. CeCe is the first to recover and the first one to grieve herself into depression. As life seems to be going on all around her, she doesn’t seem to know how to stop what she is feeling. As each one leave the hospital they each try to help coax CeCe out of her depressed state, but none of them have any luck.

This series is awesome! I loved reading about each of the characters, my favorite was CeCe, she reminded me a lot of my daughter. She is very sassy and nothing seems to stop her. The plotline and characters are fully formed and full of life. I really enjoyed this series!