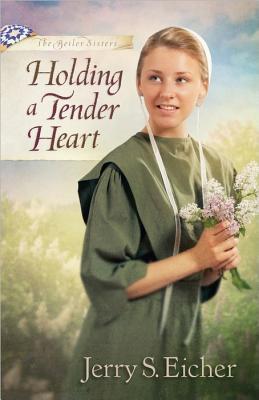 About the Book:
Debbie Watson is a young Englisha girl who has grown up admiring her Amish friends, the Beiler sisters. As she prepares to graduate from college, Debbie considers making the life-changing decision to convert to the Amish faith and lifestyle.

Soon Debbie’s presence in the community attracts the attention of two suitors: Alvin Knepp, the youngest son of a poor Amish farmer, to whom Debbie is very much attracted; and Paul Wagler, the more successful and sought-after man, whose constant attention to Debbie reminds her of her old Englisha boyfriend–whom she’d rather forget.

About the Author:
Jerry Eicher taught for two terms in Amish and Mennonite schools in Ohio and Illinois. He writes of his experience growing up Amish in his memoir My Amish Childhood. Jerry has been involved in church renewal, preaching, and teaching Bible studies. He lives with his wife, Tina, and their four children in Virginia.

My Review:
Debbie Watson is a young Englisher longing for a more simple way of life. She was sweetly forced into going to college after high school by her mother that at times feels smothering. she finished college and even has a job prospect but still longs for the slow, simple ways of the Amish. She has been invited into their world on several occasions by the Beiler sisters. But now she is starting to feel like she may want to commit to their ways more completely. Its not long after coming to stay with the Beiler’s that Debbie finds interest in someone in the community.

Soon Verna the oldest of the Beiler sisters takes an interest in Joe Weaver and allows him to bring her home one night after a singing, but Verna’s father is NOT pleased with this decision at all. Soon Joe gets arrested, against her fathers wishes she continues to support Joe and it is a decision that almost gets her removed from the church. It is a terrible position that Verna finds herself in, but soon her good friend Debbie will aide her in getting Joe out of this.

Jerry S. Eicher is a really good Amish writer. This book in particular has many things going on and a plot that is to die for. There is so much going on that you find yourself completely immersed so much so that you will be done with the book in one sitting.

**Disclosure** This book was sent to me free of charge for my honest review from Harvest House.