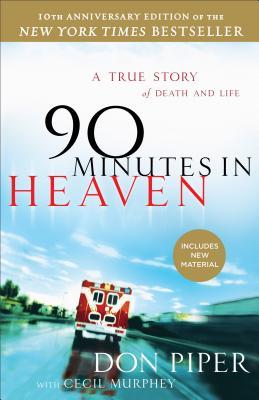 About the Book:
As he is driving home from a minister’s conference, Baptist minister Don Piper collides with a semi-truck that crosses into his lane. He is pronounced dead at the scene. For the next 90 minutes, Piper experiences heaven where he is greeted by those who had influenced him spiritually. He hears beautiful music and feels true peace.Back on earth, a passing minister who had also been at the conference is led to pray for Don even though he knows the man is dead. Piper miraculously comes back to life and the bliss of heaven is replaced by a long and painful recovery.For years Piper kept his heavenly experience to himself. Finally, however, friends and family convinced him to share his remarkable story.

About the Author:
Don Piper has been an ordained minister since 1985. He is the author of the New York Times bestseller 90 Minutes in Heaven and other popular books. He has appeared on Today, The 700 Club, James Robison’s Life Today, and other television and radio programs, and teaches across the United States and around the world. He and his wife, Eva, live in Texas. Learn more
at http://www.donpiperministries.com.

Cecil Murphey has written or coauthored more than one hundred books, including the autobiography of Franklin Graham, Rebel with a Cause. A collaborator on the bestseller Gifted Hands with Dr. Ben Carson, Cecil resides in Georgia.

My Review:
What would Heaven be like, if we could visit it but only for a few minutes? Don Piper, the author of 90 Minutes In Heaven had the awesome opportunity to visit for 90 minutes after being in a near fatal car accident. He was pronounced dead on the scene but lived to tell about it in the anniversary edition of his recently updated book. After finally waking up from this traumatic accident and realizing that God sent him back to earth–he was very bitter to those around him. But after being told by a pastor friend of his to snap out of it–he started to see things turn around for the better and not to be angry with God for sending him back.

Reading some of the author’s thoughts and feelings towards this whole experience it is reasoning enough to say that we will all get this chance one day but hopefully as a permanent resident there. The central message that I believe he is trying to convey is one that we may never know or understand why we of all people are still here or left behind but it’s not our job to know its our job to be at work until His mighty return one day.

**Disclosure** This book was sent to me free of charge for my honest review from Revell.