Review: The Ancient Secret of the Leprechauns by:Mahamad Ali ElFakir 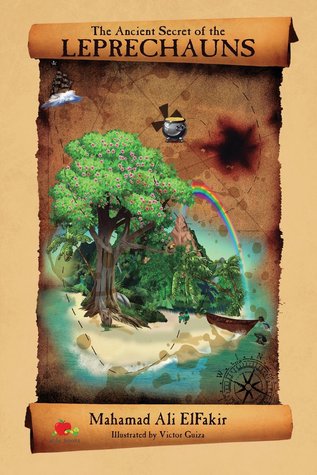 About the Book:
Long ago, during the time of the dinosaurs, three leprechauns—D’Arcy, Lorcan, and Scully—built a hidden home on the top of a mountain inside of a gigantic boulder. For millions of years, the three friends have risen each day to greet the sun and set sail to their secret island at the end of the rainbow, where they play all day in a sparkling pool of gold.
But when the leprechauns forget to secure their island before leaving one evening, they are in for a terrible surprise the next day—the gold is gone! D’Arcy, Lorcan, and Scully will have to face rough seas, sharks, a gigantic sea monster, a massive octopus, and the dreaded Captain Sea Gore and his pirate crew in their quest to recover the treasure. It’s up to Squawky the rainbow bird to teach the friends how to work together—and that through teamwork and perseverance, they can overcome any obstacles that come their way.

About the Author:
Mahamad Ali ElFakir was born in 1975 in Detroit, Michigan. He is an entrepreneur who works hard for his family. He is blessed with his wonderful wife and amazing children. BLUEBERRY BUBBLE GUM is his first book, it was inspired by his children, he says “a child’s imagination can inspire anyone.”

My Review:
True friendship is a wonderful blessing, that if you ever have just one true friend you are far richer and wealthier than even the financially secure individual.  In The Ancient Secret of the Leprechauns, the author takes us on an exciting adventures of three friends that have to work together in spite of their conflict to recover their not so hidden treasure. They have to endure so much, and because of this their friendship with each other is strengthened so much so, that they can endure anything.