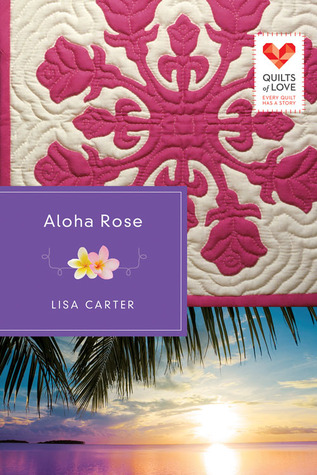 About the Book:
When Laney Carrigan sets out to find her birth family, her only clue is the Hawaiian quilt a red rose snowflake appliqued on a white background in which she was found wrapped as an infant. Centering her search on the Big Island and battling fears of rejection, Laney begins a painstaking journey toward her true heritage. Kai Barnes, however, is determined to protect the people he s come to regard as family. He thinks Laney is nothing more than a gold digger and blocks every move she makes toward her Hawaiian family. As their conflict escalates, it puts at risk the one thing that Kai and Laney both want most a family.

About the Author:
Lisa Carter is the author of Carolina Reckoning and Aloha Rose, and a writer and teacher whose articles have appeared in FamilyFun, Thriving Family, MomSense, and Christian Parenting Today. She is a frequent speaker and vocalist at women’s ministry events and has taught at the collegiate, high school, and middle school levels. Lisa is a member of ACFW, RWA and Sisters in Crime. When she isn’t writing, Lisa enjoys traveling, quilting, and researching her next romantic adventure. She and her husband have two daughters and make their home in Raleigh, North Carolina. Visit her online at LisaCarterAuthor.com.

My Review:
Lacey Carrigan has traveled a long way to find her Aunt, now being at the airport no one is there for her to bring her to her Aunt. Lacey rushes through the airport to find a phone. After calling the woman, she is still left alone in the airport. When all of a sudden a mysterious cowboy comes in and takes a look around. She finds him quite good looking but brushes off the idea of him being in search of her. But that’s until a boy calls his name drawing his attention. She secretly hopes he sees her but in a way is frightened if he does and that’s when he calls her name.

Kai Barnes was kind of forced into the position of picking this woman up. Auntie Teah thought it be best if he was to pick this Lacey person up from the airport. But he didn’t think so and he wasn’t going to be so nice when he got there. They didn’t know who she was and why she was even there and now he’s picking her up and taking her to Auntie Teah. When he gets there he doesn’t really know who he’s looking for until he sees a beautiful woman who seems to be lost and knows that has to be her. So he calls her name and her head draws to attention.

Lacey knew this guy had to be Kai but he wasn’t the nicest person. And she could be unruly right back. But still she needed to get to Auntie Teah to talk all this over, even though this guy seems to think she is up to no good. Will he stand in her way?