Litfuse Review: A Marriage In Middlebury by: Anita Higman 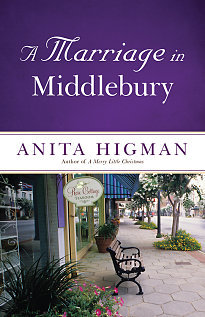 About the Book:
What happens when the matchmaker finds a match for herself?Charlotte Rose Hill has been serving up country delicacies, uniquely blended teas, and matchmaking advice for her quirky but beloved customers for more than 10 years. But for her, marriage seems like an elusive butterfly, always out of reach. At 18, Charlotte fell in love with a young man, Sam Wilder, but his family convinced her to walk away from their relationship. She did, and then became engaged to another man, who later died before they were married. Now, more than a decade later, Charlotte finds that she still has feelings for her first love. Initially thrilled to learn that Sam has come home to Middlebury, Texas, Charlotte is devastated to learn that he’s brought someone with him: his fiancée. But all is not lost when the townsfolk decide to get involved. Will Charlotte and Sam find their way back to each other?

About the Author:
Best-selling and award-winning author, Anita Higman, is the author or coauthor of thirty-five books for adults and children. She has recently been honored with a 2013 Inspirational Reader’s Choice Award and is a two-time finalist in the 2013 Selah Awards as well as a finalist in the 2013 Cascade Awards. She holds a BA in the combined fields of speech communication, psychology, and art. Anita loves good movies, exotic teas, and brunch with her friends. Please visit her online at http://www.anitahigman.com.

My Review:
Charlotte Rose Hill runs a cozy little tea shop that everyone full enjoys. She enjoys her job greatly and has had a good enjoyable life, that is until one of her employees comes to her that there was a cute guy standing outside of the tea shop. Charlotte’s heart starts to  race, could it be that her ex has come back? But everything is not as it seems.

Sam Wilder is quite delighted when he sees Charlotte after all these years, she hasn’t changed at all and is just a beautiful. He hasn’t come back to be with her which is a pity, he has someone he wants her to meet. The love of his life, his fiancee. He knows Charlotte has to be happy with her since after all she said she would love to do catering for the wedding. But that’s not the only thing he has to tell her. His crappy father has asked for her and that just isn’t like him. What secret lies behind this old mans eyes?