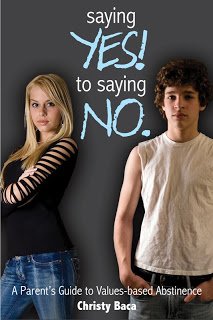 About the Book:
“Saying Yes! to Saying No, moved me to being convicted of how calloused I had become to the influences in our world today, and yet I felt challenged to take a stand against those same influences for my sons. If you have children or grandchildren, you will want to teach them to “Say No” when it counts, and this book will give you the tools to start now!”
-Ryan Knight, D.C.
Sex is going to become a part of everyone’s life at some point. Are you one of the 90% of parents who wish they knew what to say when it came to talking to your son or daughter about sex? Saying Yes! to Saying No will equip you with scripture, and communication tools to give you confidence to become the parent who is meeting the needs of the 87% of teens who say it would be easier to maintain a sexually pure lifestyle if their parents would have open conversations with them about sex. Saying Yes! to Saying No addresses issues like sexting, pornography, boundaries in dating, and much more. Saying Yes! to Saying No will give you tools to start developing the conversation of sexual intimacy from age three, building on that conversation through your son or daughter’s young adult years.
Powerful Scriptures are placed in each chapter to remind you of the promises God has given you as a parent.

About the Author:
Christy holds a teaching degree from Texas A&M.  She has taught abstinence education for 9 years in public schools, private schools and youth groups. Christy teaches from the perspective of a real mom living in a real world.  Her communication is filled with truth, delivered with energy, warmth and grace. She lives in North Texas with her husband, David, of seventeen years and their two teenage daughters. When Christy is not speaking or writing she can be found in the kitchen, at the Architect’s office keeping books, at a basketball/soccer game, choir concert, football game watching her favorite hi-stepper dance or with her friends.

My Review:
The world that we are living in is not the same as it was 10 years ago much less 20 years ago when I just happen to be a teenager. The advancement in technology has made our lives and the lives of our children blessed in many ways and in many ways has become a curse. With this advancement evil has been thrust into the spotlight alot more than it ever was before. So as parents it is our job to equip them with the information they need to step into this world and in sense prepare them for battle.

The author a mom herself has been teaching children about abstinence for many years and has also been trying to teach parents how to prepare their children in a world filled with everything pointing to sex and instant gratification. She has tirelessly researched for her readers all possible venues out there that we should know about and be on the look out for. Her bottom line is put all you can into your children and help them to see the bigger picture here. They are apt to hurt themselves in more ways than one. When they reach a certain age it is up to them to use their parents teachings to protect themselves.

Christy Baca is telling the world what she already knows and has taught her children. By teaching them abstinence we give them the key to a better future marriage and a better life the way God intended.

**Disclosure** This book was given to me for my honest review from the author.